Whether you’re just getting started with calligraphy or looking to take your already formidable skills to the next level, these calligraphy alphabet letters can help. Choose from 5 free full alphabets, from calligraphy letter A to Z! 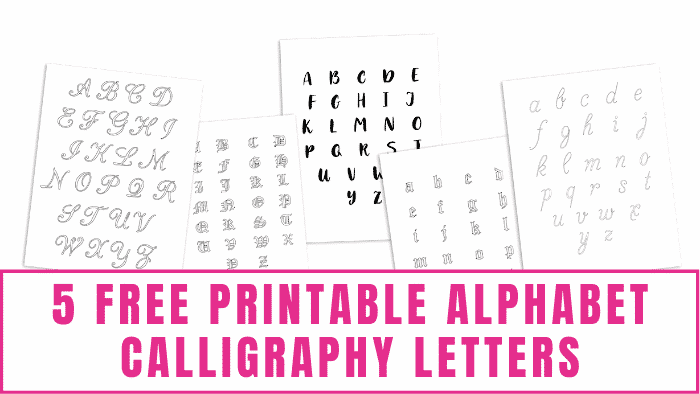 If you aren’t familiar with it, calligraphy is pretty great. It’s:

Oh, and calligraphy can make the jump from hobby to side hustle if you get good at it! 🙂

If you’re brand new to calligraphy, it might be helpful to read “Learn How to Write Calligraphy” before you go any further. However to sum it up, getting started with this hobby is as simple as tracing the alphabet, calligraphy letter A to Z.

Yep, tracing. Makes sense though, right? How did you learn to write your letters in the first place? You probably engaged in some kind of tracing or mimicry, and learning calligraphy is no different.

In this post, I’ll share 5 different calligraphy printables that you can use to learn to write different styles of calligraphy. Each of these are full printable calligraphy alphabet templates, meaning you get letters A through Z. To use, simply print the letter you want, such as calligraphy letter A, put a thin piece of paper over top, and trace. Keep at it; you’ll develop muscle memory (and confidence) and be able to transition to free-hand calligraphy in no time!

In addition to adding elegance to any project, this free calligraphy template can also be super relaxing. One of the reasons that coloring is so mentally beneficial is because it promotes mindfulness. I think tracing the letters in this calligraphy printable does the same thing. Yes, you have to focus on tracing or drawing the letters (vs. whatever else is going on in your life), but these letters just sort of flow; you don’t have to be focused to the point of frustration, if that makes sense.

Bonus: If you like the swooping flow of this printable calligraphy alphabet template, consider introducing traditional cursive into your calligraphy hobby. Haven’t written cursive since grade school? No worries, refresh your memory with these cursive calligraphy letters to trace:

If you’re planning to use calligraphy to create things, you probably won’t get far without a calligraphy lowercase letters alphabet printables. No worries! I’ve got you covered. This lowercase printable calligraphy alphabet practice template mirrors the elegance of the uppercase alphabet above.

That means this free calligraphy template is also great for weddings, special occasions like anniversaries, or making décor and invites for the tea party your daughter is hosting for her stuffed animals. 😉

If you’re on the hunt for letters that are a little less formal, this printable calligraphy alphabet template is ready to kick off its shoes and get comfortable! 😉 This modern calligraphy alphabet is a bit more bold and overall, great for making a statement. Use it for fun and thoughtful projects, like homemade cards.

Psst! If you are making a card, here are some other free calligraphy templates that might come in handy!

Bonus: This modern calligraphy letters template is hip and fun. (Just like you, right? 😉 ) If you’re looking for more fun and fresh letters to add to your lineup, you’ve got to check out bubble letters. Below are some of my favorite bubble letter alphabets.

Speaking of making a statement…. This uppercase gothic calligraphy alphabet is sure to get anyone’s attention!

This style is a bit more complicated than the others, so be prepared to use this printable calligraphy alphabet practice sheet a little longer before you move to free-hand. Also, for a little extra help, read “Learn to Write in Gothic Calligraphy“.