When was the last time your child asked you for help with his or her homework, you looked at the problem in question, and drew a complete blank? For me, it’s been a while … but that’s mainly because we’re in the middle of summer! 🙂 I know that the school bus is right around the corner, so I’m getting ready by tidying up my collection of educational printables and reviewing subjects like math.

I created a triangle template printable that can help demonstrate geometry concepts like the perimeter of triangles. As mentioned above, in addition to the free printable triangle shape, this post also includes an all-things-triangle refresher. The refresher will cover:

Bonus: Have younger kids and want to help them learn shapes? Head to the Freebie Finding Mom shop to get my 132-page shapes bundle now! 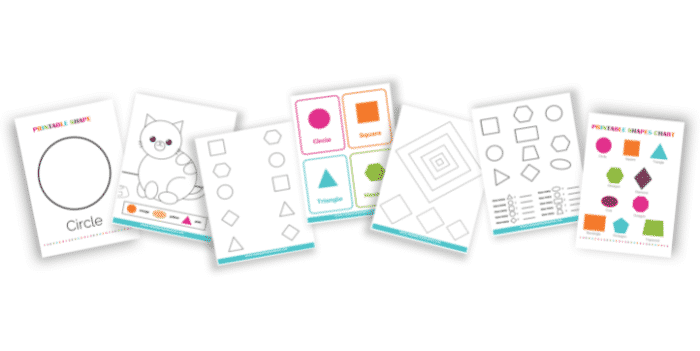 A lot of the triangle shape refresher information is geared toward school-age children (not your preschooler). However, if you have a little one at home, you can still put this triangle printable to use! Here are some ideas:

Tip: Your matching game doesn’t need to be limited to shapes. You can use other templates, letters, and numbers to create variations of the game or make it harder as your child learns more. For example, challenge your kid to find the next number in sequential order or to match an uppercase letter to its lowercase match. Download free printable letters and alphabet letters here and browse other bubble letters templates here.

Are those creative juices flowing? Great! Let’s keep moving by talking about what is a triangle and different types of triangles.

Before we can break down the different types of triangles—right triangle, acute triangle, obtuse triangle, congruent triangles—let’s define what a triangle even is. A triangle is a two-dimensional closed polygon that has three straight sides, three angles, and three vertices (points).

There are a few special right triangles. They are:

More on these special right triangles in just a sec!

If you read the Free Printable Trapezoid Shape post, you know there are two different ways to define a trapezoid—inclusive and exclusive. The answer to what is an isosceles triangle is similar.

What is an acute triangle?
This is a triangle in which all three angles measure less than 90º. This means there can never be an acute right triangle.

What is an obtuse triangle?
This is a triangle in which one angle of the triangle measures more than 90º. Only one angle in a triangle can be greater than 90º; otherwise, the angles of a triangle would not add up to 180º.

So if you know the value of X (the length of the side opposite the 30º angle), you could easily find the length of the other two sides because the ratio is always the same in this type of triangle.

Tip: The √ means “square root.” If you aren’t familiar with the concept of square root, you can read more here on the square shape post.

What is a 45 45 90 triangle?
The 45 45 90 triangle is another of the special right triangles. It is an isosceles triangle in which two of the angles measure 45º and the other angle is 90º. Recall from the section on isosceles triangles that the two legs are the same length. This means that the length of the two shorter sides of the triangle are equal to one another; the ratio for the length of the long side of the triangle is X * √2.

What is a 3 4 5 triangle?
Also known as a Pythagorean Triple Triangle, this is the last of the special right triangles. It is also a right scalene triangle, which means all three sides are a different length but they have a certain ratio to each other.

If the length of the sides of your triangle can fit that formula, then you are dealing with a 3 4 5 triangle.

Note: This does not necessarily mean that all three sides or all three angles are the same! You could have congruent scalene triangles.

Whew! Who knew there were so many different types of triangle shapes! We haven’t even gotten to the number crunching portion of the post yet. Before we move on, be sure to snag the triangle printable below. It’ll come in handy when explaining various triangle math concepts like the perimeter of triangles.

Bonus: It may be easier to demonstrate some math concepts, like the area of triangle formula with a pre-colored triangle template printable. Where might you find one of those? Oh, right here! 😉 Download the pre-colored free printable triangle shape now.

For younger kids, these printable triangle tracing worksheets may be more their speed.

How to Find the Perimeter of a Triangle

Ready to get at those numbers? If you’re answer is an emphatic “no,” don’t worry; take a deep breath. We’ll start with something simple—the triangle formula for finding perimeter.

Is the word “formula” freaking you out? Yeah, it can sound a little intimidating, but finding the perimeter of triangles is actually pretty easy—all you need is some simple addition.

The triangle formula for finding the perimeter would look something like this:
Perimeter = a + b + c

In that formula, “a,” “b,” and “c” represent the three sides of the triangle.

How to Find the Area of a Triangle

Note: The height is not the length of one of the sides in this case!

So, if you are looking for the area of an equilateral triangle, as long as you know the length of one of the sides, you can still solve the problem even without the height. Here’s the formula you would use: Area = (√3) / 4 * s²

In that formula, “s” stands for the length of one of the sides of the triangle. In order to solve this formula, remember your order of operations!

So to solve the formula, you would find √3 first, then the square of the length of your side, and then do your division and multiplication.

How to Find the Angle of a Triangle

Finding the angles of a triangle can vary based on what information you’re given and the type of triangle you’re working with. However, one thing will always be the same—the angles must add up to 180º.

So the easiest answer to how to find the angle of a triangle is to already know the measure of two of the angles and to subtract those from 180º. However, depending on the math level your kid is in, the problem may be more complicated. Just remember, at the end, you must have a total of 180º!

What is the Triangle Inequality Theorem

The Triangle Inequality Theorem is actually a pretty simple concept, so I thought it’d be a good note to end on after all that math! A little confidence booster, if you will! 🙂

If the three sides do not conform to the Triangle Inequality Theorem, the shape cannot actually be a triangle because it couldn’t be a closed shape.

Had your fill of triangle shapes? No worries, there are plenty more fish in the sea … or should I say shapes in the world? Here are more printable 2D shapes you can download right now!

How to Draw A Triangle

Wondering how to draw a triangle shape? Try one of these two options:

Not into learning how to draw a triangle shape or other complicated art projects? No worries, rev your creative engine with a coloring sheet. Try the:

Stay crafty and creative with even more free printable templates!

Use these letter and number printables to take your matching game up a notch!