This is a sponsored post. All opinions are my own.

With the help of Cricut’s easy-to-use products, like the new Cricut Explore 3, you can make zoo themed ABC letter games for kids, like the one in this post! This letter recognition game and letter matching game will challenge your child to find upper and lowercase versions of each letter in order to help the befuddled zookeeper round up all the escaped animals. 🙂 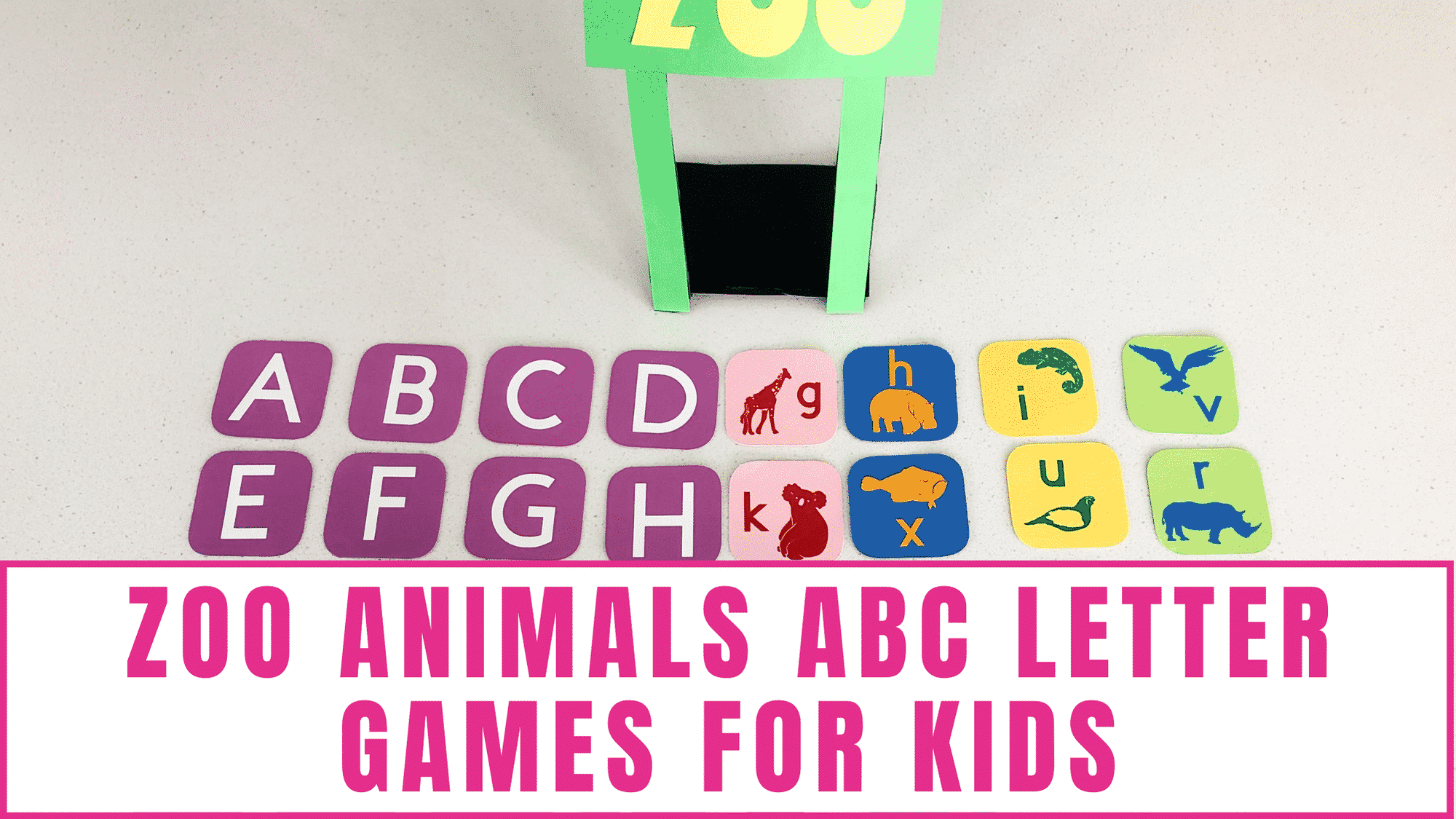 Sure, you could buy letter recognition games, letter matching games, and letter sound games … or you could make a game that combines all three!

Whoa, whoa, whoa! Where are you going? I saw you inching the mouse toward the back button! Was it the concept of making a game that did it?

If you aren’t the craftiest parent on the block, no worries! In fact, join the club. However, with the help of a few not-so-secret weapons you (yes, you) can make a game that will educate and entertain your child and possibly even solicit a few envious looks from other parents. 😉 With the help of my favorite Cricut products, I’ll show you how!

The project I’ll be making today is a letter game, kindergarten or preschool appropriate, that builds both letter recognition and association. (Those are both important pre-reading and pre-writing skills.)

Why Make Your Own ABC Letter Games for Kids

Doesn’t she have enough to do without spending days making a game?
Of course I have things to do. What parent doesn’t? However, did you know that certain types of crafting, including coloring and calligraphy, can actually promote relaxation. No, seriously, I’m talking on par with meditation!

Plus, I like the idea of creating a custom letter recognition game from durable materials that my kid can play on-the-go, outside, or just about anywhere! Oh, and it doesn’t take days, I swear! With the help of Cricut, you’ll be done in no time.

Can’t letter games, kindergarten and preschool oriented, be purchased on Amazon? I’m pretty sure I’ve seen them….
You can can buy letter games, preschool or kindergarten difficulty levels, from Amazon and about a million and one other online retailers. However, it can be hard to find games that are made of a durable material or letter matching games that build not only recognition but sound association.

So, in order to get a letter recognition game and a letter sound game that was custom tailored to my kid’s learning, I turned to Cricut!

Unfortunately, I couldn’t find a way to use all of Cricut’s amazing products in the production of this letter sound game/letter recognition game. (There’s always next time, right? 😉 ) Here are two products that I’ll definitely be finding a good use for very soon!

1. Access Cricut’s Design Space, and add zoo animal images to a new project. I chose a zoo animal whose name starts with every letter of the alphabet for this letter games, kindergarten and preschool level. Here are the animals I selected:

Note: Each animal playing card in this letter game for kids will have a corresponding lowercase letter. The second set of cards (the purple cards) will just have an uppercase (a.k.a. capital) letter on them.

3. Use your Cricut machine to cut out all of the animal images and letters on Cricut Smart Vinyl. 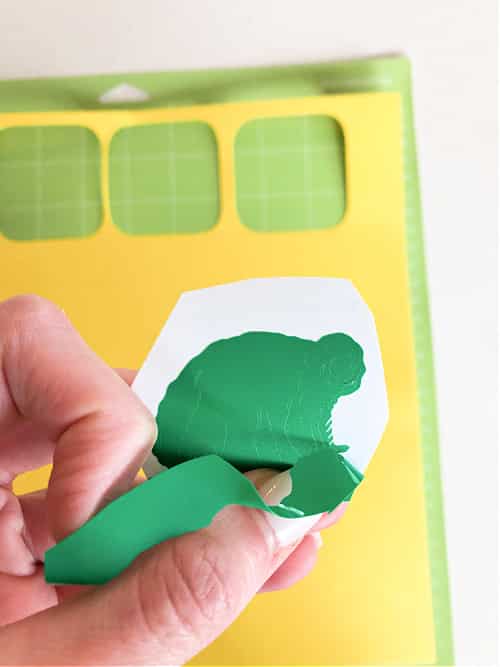 4. Remove the animals and letters from their vinyl backing. (This step was so easy; Cricut’s Smart Vinyl is amazing!) 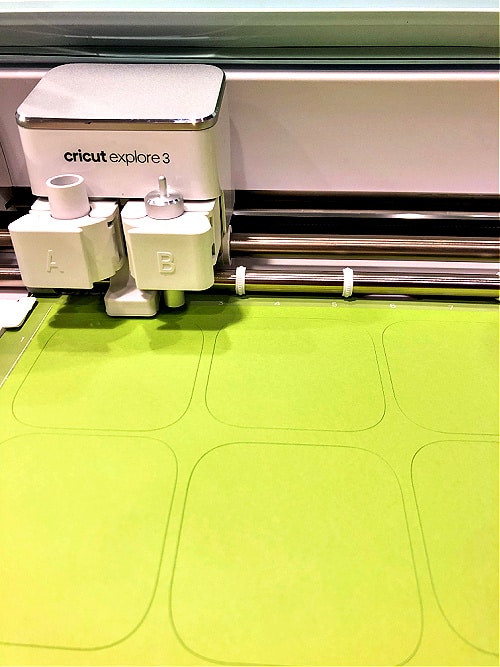 5. Cut out the rounded squares on cardstock.

Tip: I chose cardstock because I thought it would be more durable since lots of little hands may be touching the “playing cards” in this letter games for kids. 😉

6. Remove the rounded squares from the cardstock. 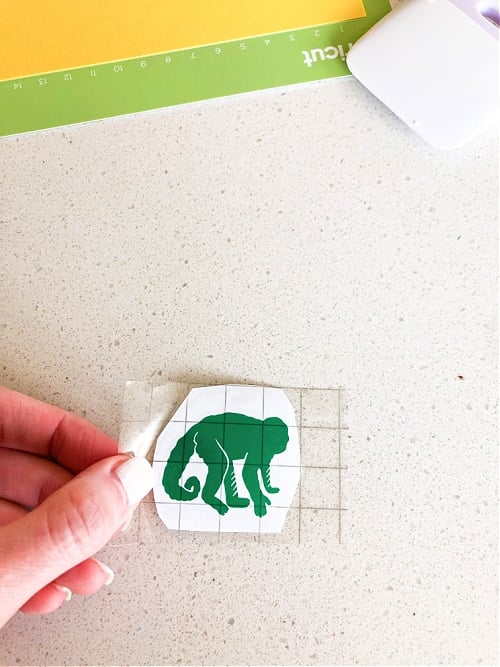 7. Place transfer tape over the cut out images (animals and letters). 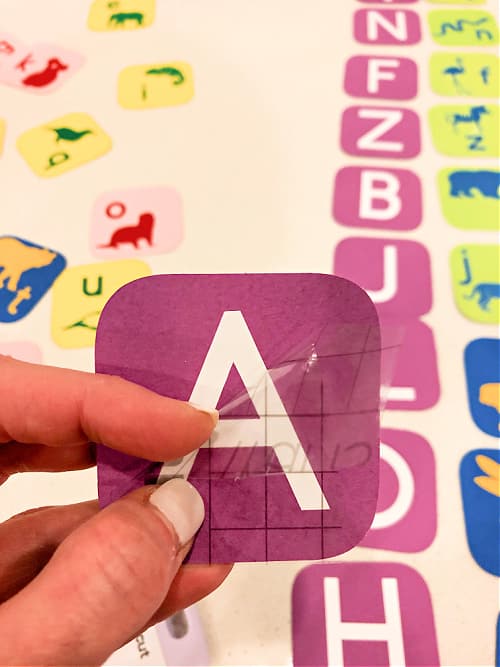 8. Peel off the transfer tape 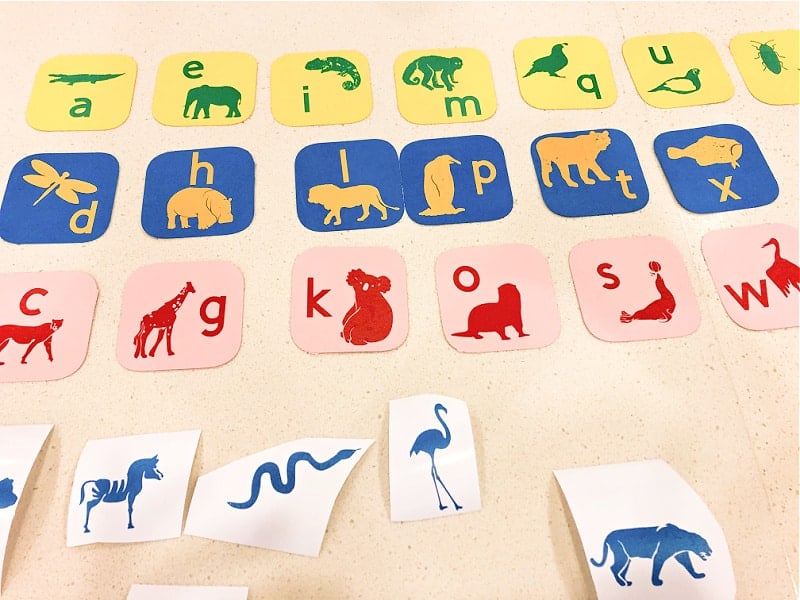 9. Affix the animals and letters to the cardstock playing cards.

10. After the playing cards are finished, cut out rectangles to make the zoo along with the letters “Zoo.”

Note: You may want to make make multiple separate zoos, one for each player to catch his or her animals in.

11. Assemble the zoo base with a glue stick. 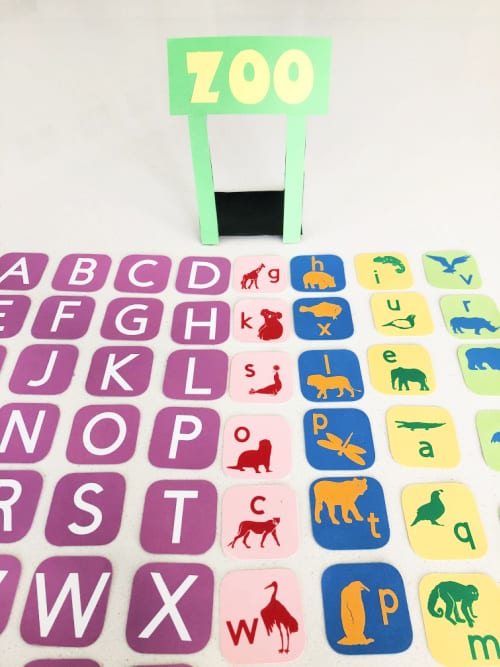 12. Optional: Add cardboard to the base of the zoo sign to make it sturdier.

13. Play the Zoo Animals ABC Letter Games for Kids with your child and have a blast! 🙂

How to Play Zoo Animals ABC Letter Games for Kids

Ready to dive into this letter recognition game? Okay, here’s the scoop:

The somewhat befuddled zookeeper accidentally let some of the zoo animals out! 🤦‍♀️ Can your kid lend a hand by returning the animals to their enclosures? The problem is that the only way to do this is to match the uppercase playing card with its lowercase counterpart (which also features an animal that starts with that letter).

Oh, and this isn’t just a letter matching game! Your child must also:

Whoever can return the most animals to the zoo (find the most matching pairs) wins!

Tip: You can make this game even more challenging (as well as build visual memory skills and concentration) by starting with all of the cards flipped over so that your child literally has to find the letters.

Bonus: While you’re waiting for your Cricut products to arrive, you can take advantage of other ABC and language learning tools right here on Freebie Finding Mom! For example: