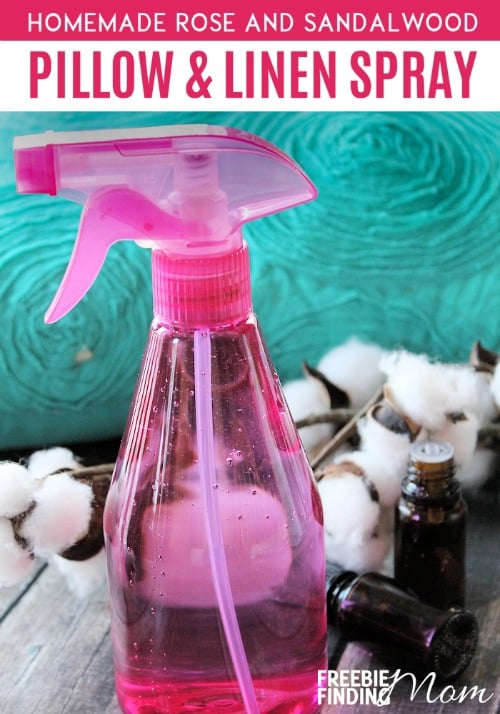 While there’s a lot I like about the winter I could definitely do without shoveling the driveway and the stale smell the house gets after being closed up for so long. If you don’t have this problem, it’s hard to explain. It’s not a bad odor (like garbage) since I stick to a pretty strict cleaning schedule but more of a stagnant, un-fresh smell. In addition, with the house shut up tight as a drum, any smells (ex. from cooking) tend to linger which can be unpleasant. That’s where homemade linen spray can really come in handy.

I always make sure to have some homemade linen spray on hand during the winter months. It’s a quick and easy way to freshen up the house since you can spritz it on pretty much any soft surface including the little ones stuffed animals. If this was a store-bought product, I’d be pretty leery about spraying it on his snuggly items but since this homemade linen spray contains only natural ingredients I know it’s safe.

I chose this rose and sandalwood essential oil scent for my homemade linen spray in honor of Valentine’s Day. The hubby and I typically stay home on V Day since getting a babysitter takes a minor miracle and the crowds are anything but romantic so I thought this homemade linen spray would be a great way to create a more intimate environment.

The sandalwood essential oil in this homemade linen spray provides mental clarity. In fact, a 2006 study that evaluated the effect of sandalwood oil on attention and arousal levels found that those who received it “felt more mentally aware and demonstrated behaviors linked to increased attention and cognitive clarity.”

The rose essential oil in this homemade linen spray is a double threat. It is an aphrodisiac and an antidepressant.

Since this homemade linen spray provides mental clarity and can boost your mood you have to admit it’s pretty great year round. 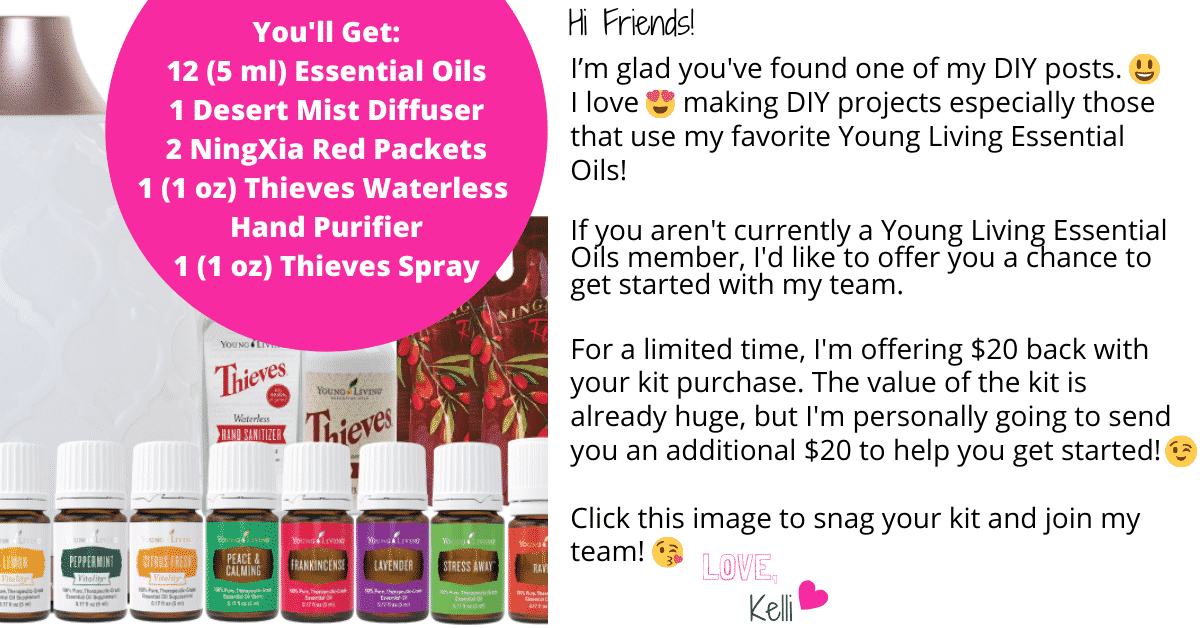 In addition to spritzing the house with this homemade linen spray, I’ll be trying out some other stay-at-home Valentine’s Day recipes. My menu isn’t final yet but I’m considering these:

While you can use this homemade linen spray on pretty much any soft surface including pillows, blankets, furniture (ex. couch cushions), curtains, shower curtains, towels, pet beds, and stuffed animals, if you’re looking for something to freshen the air in your home try this DIY scented room spray. 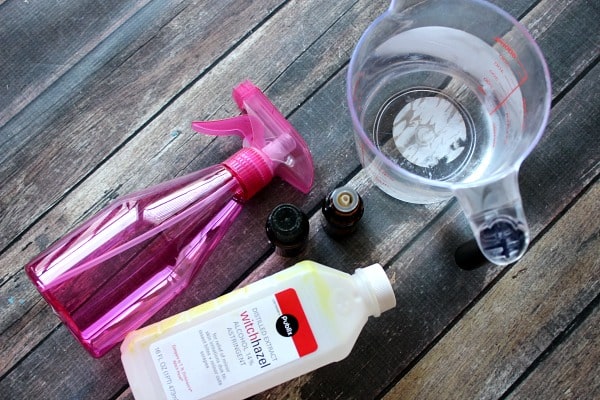 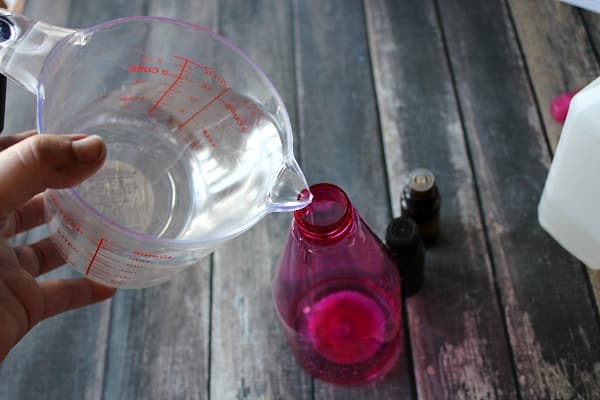 1. Pour distilled water into a large spray bottle with a fine mister.
Note: Avoid messes by using a funnel or a measuring cup with a pour spot. 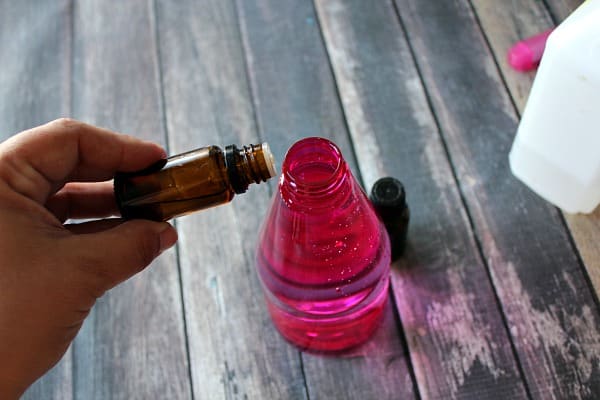 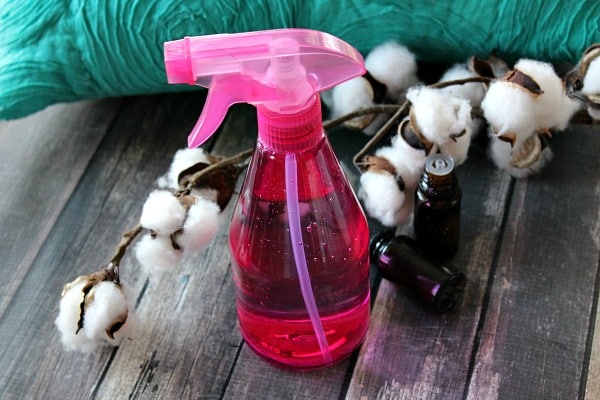 3. Shake homemade linen spray to combine ingredients.
Tip: Label your bottle so you know what scent you have on hand.

2. Mist linens lightly before ironing, on your pillows after making the bed, across curtains, or on a shower curtain to freshen up the bathroom.

Looking for a homemade linen spray that promotes relaxation? This lavender linen spray is perfect for bedtime.

Tip: Use this monster spray variation on the lavender linen spray to help the little one who is afraid of what’s lurking under the bed get a good night’s sleep.

For more DIY hacks and projects, be sure to follow Freebie Finding Mom’s DIY Fun Pinterest board. 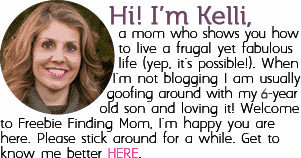 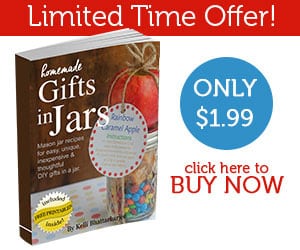 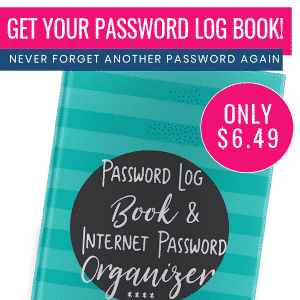