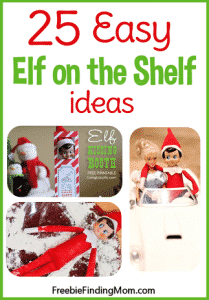 Did the title of this post throw you for a loop? Are you wondering what exactly the Elf on the Shelf is? If so, learn all about Elf on the Shelf and how he helps Santa manage his naughty and nice list. Whether this concept is new to you or a much beloved family tradition, here are 25 creative yet easy Elf on the Shelf ideas that are sure to inspire you.

Why not join in the fun? Pick up an Elf on the Shelf for your family!

1. Sneaky Little Elf: Nothing to see here but another nutcracker.

2. Resourceful Elf: This Elf on the Shelf is being quite resourceful! He’s using a small candle to roast marshmallows for s’mores. Hmmm – that’s giving me ideas!

3. The Ladies Man Elf: Elf is busy hanging with the ladies, or in this case, Barbie and her friends.

4. Just Chillin’ Elf: Elf on the Shelf is looking a bit worried – hopefully the kids don’t try to use him to butter their toast! 5. Piggyback Riding Elf: Why not get a lift from a friend? Christmas time wears him out!

6. Catching some Zzzzz Elf: Elf on the Shelf better hope cold and flu season isn’t too rough this year otherwise he’ll be losing his bed.

7. Tea Time Elf: Elf is enjoying an afternoon tea with a lady friend. With the bitterly cold temperatures and snow on the ground, who can blame him?

8. About to be a Goner Elf: Oh no! Stop that train! Elf on the Shelf is about to be a goner thanks to a few mischievous kids. 9. Delivery Man Elf: At Santa’s request, elf has been instructed to inform the family he says, “hi!”

10. Just Hangin’ Around Elf: This busy Elf on the Shelf deserves a little time to kick back and relax.

11. Chocoholic Elf: Gotta get that last crumb, even if that means diving head first! This is my kind of elf! 13. Kidnapped Elf: Eek! Elf on the Shelf has been kidnapped and held for ransom (a.k.a. Christmas gifts)! I have a feeling it won’t be long before he’s released. 🙂

14. Pumping Iron Elf: The holidays can be fattening for everyone, elves included.

15. Busting Out Elf: Here I am! Let’s get this party started!

16. Handy Helper Elf: There is no free ride around this house. Even Elf on the Shelf has got chores to do including this stinky one. 17. Relaxing Elf: Ahh…elf is getting a little “me” time in before Christmas Day by indulging in this bubble (a.k.a. marshmallow) bath. I have to admit, I’m a little jealous!

18. “Snow” Angel Elf: I don’t blame Elf on the Shelf for choosing to use flour instead of snow to make a snow angel, it’s cold outside! 21. Daredevil Elf: Elf has borrowed a bike for a dangerously good time. Hope he doesn’t do any pop wheelies!

22. Copycat Elf: This is Elf on the Shelf’s attempt at cloning himself.

23. Sweet Tooth Elf: Elf tried to hold out, but eventually he caved in to a box of mini cupcakes. Been there!

24. Kiss Me Elf: For the Elf on the Shelf looking for some extra lovin’ this holiday season, download this printable elf kissing booth.

I’d love to know: What are your favorite Elf on the Shelf ideas? Please share in the comments.